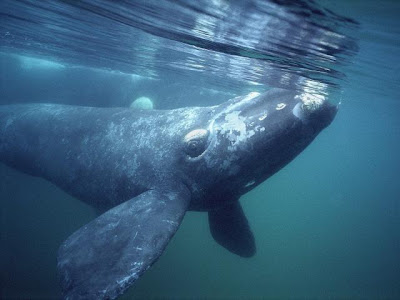 page 268: epigraph from The New York Times. But many whales do continue to suffer in the North Atlantic, notably through entanglement in fishing gear which can cause a lingering death over six months.

page 268: musician...recorded...long whistles. The musician was Max Eastley. A sample recording is here. My account of the expedition is here

page 269: not presence but absence. The degradation of terrestrial soundscapes is noted by Bernie Krause. See here or here.

page 269: true songs.  Complex songs have now been observed in a number of whale species besides humpbacks. Bowheads whales, for example, jam like Hendrix for months.

page 278: roar of machines. See deafening and A rising tide of noise is easy to see. Listen to the Deep links underwater observatories across the oceans with the aim of creating a global picture of noise and its effects in order to inform future policies intended to reduce noise. Whisper of the Wild describes the emerging field of terrestrial soundscape ecology. 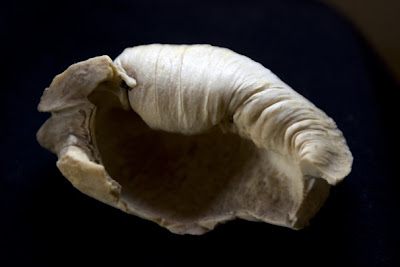 In 'Voyager, Chief', an essay published in Sightlines, Kathleen Jamie writes that whales' eardrums  (pictured above) were greatly prized by whalers:


I've heard it said that...they were the only things to emerge from the final furnace the whales' carcasses were put through - the left-over bits that is. I've read - frankly, I've read as much as I can bear about whaling -- how the whalemen, slithered and groped in the whale-gore, seeking those ear drums...I find [the eardrums] beautiful and sad and complete; all that can be said about sea-waves and sound-waves, song and utterance, is rolled together in these forms.
...What did they hear...? They heard us coming, that's what.

P.S. In Right Whales Decoded Julia Whitty reports on recent findings that Southern right whales are slowly repopulating New Zealand waters from which they were eliminated in the 19th century.
Posted by Caspar Henderson at 10:38