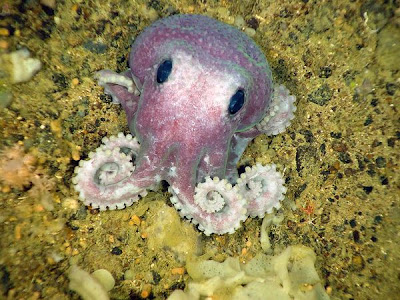 
Tell me, O Octopus, I begs
Is those things arms, or is they legs?
I marvel at thee, Octopus;
If I were thou, I'd call me Us.

page 228: sophisticated...behaviours.  See, for example, this film of an octopus holding a shark at bay while wrestling three zip ties of a baited canister at the same time.

page 228: awareness, 'full blown' consciousness. In August 2012 a a group of cognitive neuroscientists, computational neuroscientists, neuroanatomists, neuropharmacologists an neurophysiologists declared that octopuses are among the non-human animals that possess "the neurological substrates that generate consciousness."  See also Deep Intellect: inside the mind of an octopus by Sy Montgomery.

page 229: Vampire squid. Matt Taibbi wrote a great article but he misrepresented the actual animal.  For an octopus that looks like Marge Simpson see here. 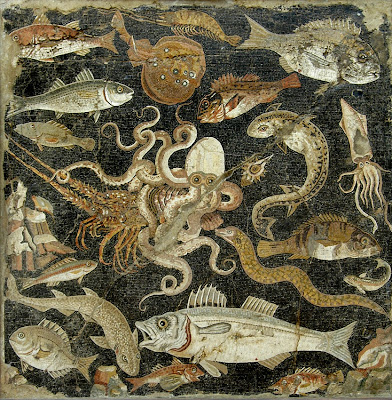 page 233-4: Victor Hugo. According to China Miéville (M.R. James and the Quantum Vampire):


The spread of the tentacle – a limb-type with no Gothic or traditional precedents (in ‘Western’ aesthetics) – from a situation of near total absence in Euro-American teratoculture up to the nineteenth century, to one of being the default monstrous appendage of today, signals the epochal shift to a Weird culture.

page 235: Clues about the potential future of our species. See a sixth sense.

page 237: a happy childhood. In You Are Not a Gadget, Jaron Lanier distinguishes the good side of childhood, which he associates with Gaston Bachelard's Poetics of Reverie, from the bad side as expressed in works like William Goldingʼs Lord of the Flies. The good includes numinous imagination, unbounded hope, innocence and sweetness:


This aspect of childhood is the very essence of magic, optimism, creativity, and open invention of self and the world. It is the heart of tenderness and connection between people, of continuity between generations, of trust, play and mutuality. It is the time in life when we learn to use our imaginations without the constraints of life lessons. The bad is more obvious, and includes bullying, voracious irritability, and selﬁshness.

Posted by Caspar Henderson at 06:58