The apparent ability of at least some species of cetaceans to protect their ears from loud noises seems to be good news.

A downside, perhaps, is that the US Navy (and others) will probably cite the findings in support of what they plan to do anyway.  By the US Navy's own estimates, loud booms from its underwater listening devices result in temporary or permanent hearing loss for more than a quarter of a million sea creatures every year. Planned expansions could raise the annual hearing losses among sea mammals to more than one million every year.

P.S. ongoing submarine activities by the U.S. Navy are just a small part of the picture across land and sea. Ah, "the privilege of absurdity; to which no living creature is subject, but man only". 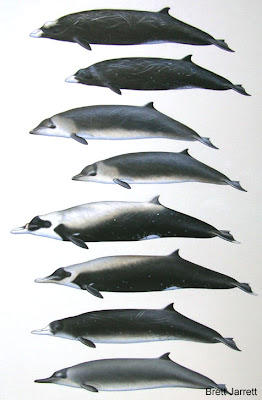 (Image: various species of Beaked whale. Can they block their ears?)
Posted by Caspar Henderson at 07:37

Email ThisBlogThis!Share to TwitterShare to FacebookShare to Pinterest
Labels: cetacean