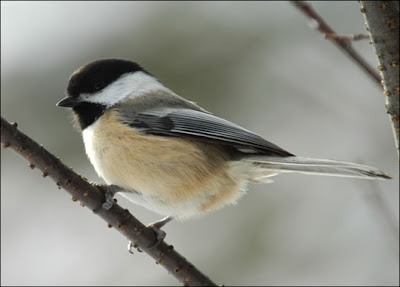 A previous post refers the extraordinary colour vision of Gonodactylus and other stomatopods. (If you haven't already listened to Radiolab's singing a rainbow podcast, do). But closer to home than this strange undersea creature there are creatures whose colour vision is amazingly refined compared to ours (though less refined than that of stomatopods): songbirds.

In The Forest Unseen David George Haskell describes vision in the chickadee:


Chickadee eyes...perceive more colors than mine can. I view the [ground] with eyes that are equipped with three types of color receptor, giving me three primary colors and four main combinations of primary colors. Chickadees have an extra color receptor that detects ultraviolet light. This gives them four primary colors and eleven main combinations, expanding the range of color vision beyond what humans can experience or even imagine. Bird color receptors are also equipped with tinted oil droplets that act as light filters, allowing only a narrow range of colors to stimulate each receptor. This increases the precision of color vision. We lack these filters, so even with the range of light visible to humans, birds are better able to discriminate subtle differences in color.  Chickadees live in a hyperreality of color that is inaccessible to our dull eyes.

It may be possible one day, far in the future,  to engineer something like this in humans. At present hallucinogenic drugs offer an impression or illusion that we can perceive colours far beyond the normal realm of experience.  Oliver Sacks [1] reproduces this account from a young man who was a subject in an LSD study at Columbia University in the 1950s or 60s:


The room about me receded into a tunnel of oblivion as I vanished into another world...The heavens above me, a night sky spangled with eyes of flame, dissolve into the most overpowering array of colors I have ever seen or imagined, many of the colors are entirely new -- areas of the spectrum which I seem hitherto to have overlooked. The colors do not stand still, but move and flow in every direction, my field of vision a mosaic of unbelievable complexity.

Sacks reports that a combination of amphetamine, LSD and cannabis allowed him to experience a pure indigo:


It was the color of heaven, the color, I thought, which Giotto had spent a lifetime trying to get but never achieved -- never achieved, perhaps, because the colour of heaven is not to be seen on earth. But it had existed once, I thought -- it was the color of the Paleozoic sea, the color the ocean used to be. I leaned toward it in a sort of ecstasy. And then suddenly it disappeared, leaving me with an overwhelming sense of loss and sadness that it had been snatched away. But I consoled myself: Yes, indigo exists, and it can be conjured up by the brain.

A few months later Sacks briefly experienced 'indigo' again with the aid not of drugs but the music of Monterverdi.

But by whatever means humans induce new experiences of colour in future, there will be a foundational difference between those experiences and the experiences of birds and stomatopods. In the case of the latter two, the capability is an advantage in the pursuit of prey, and has been naturally selected. 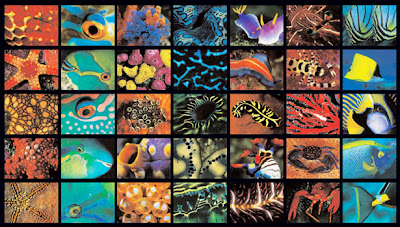