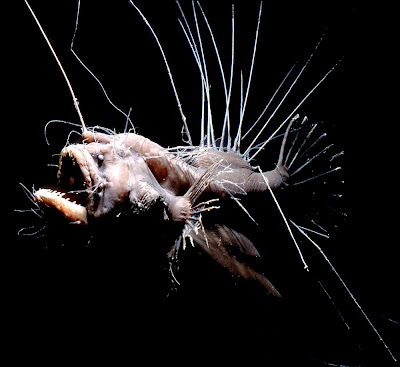 How extraordinary, strange, and incomprehensible are the creatures captured out of the depths of the sea! The distorted fishes; the ghastly cuttles; the hideous eel-like shapes; the crawling shell-encrusted things; the centipede-like beings; monstrous forms, to see which gives a shock to the brain. They shock the mind because they exhibit an absence of design. There is no idea in them.

....They are not inimical of intent towards man, not even the shark; but there the shark is, and that is enough. These miserably hideous things of the sea are not anti-human in the sense of persecution, they are outside, they are ultra and beyond. It is like looking into chaos, and it is vivid because these creatures, interred alive a hundred fathoms deep, are seldom seen; so that the mind sees them as if only that moment they had come into existence.

-- Richard Jefferies in The Story of My Heart (1883). Jefferies did not understand Darwin. The ‘design’, the ‘idea’ in all creatures, including those in the deep, is (it seems obvious to us) survival, and in this they obviously succeed.

But there’s insight here all the same. The shock Jefferies experiences and that we still feel today is real enough and probably comes from a joining together of things alike and unlike. Deeply programmed to respond to faces, we are fascinated and alienated by strange ‘masks’ never (before recent human meddling) seen in sunlight. We are drawn to them and yet they are not for our eyes.

The tension may relate to a larger one between, on the one hand, the transcendent rapture that Jefferies expresses so vividly in the book and, on the other, the non-human reality he also sees:


a great part, perhaps the whole, of nature and of the universe is distinctly anti-human. The term inhuman does not express my meaning, anti-human is better; outre-human, in the sense of beyond, outside, almost grotesque in its attitude towards, would nearly convey it.

or as he writes a little earlier:


Those who have been in an open boat at sea without water have proved the mercies of the sun, and of the deity who did not give them one drop of rain, dying in misery under the same rays that smile so beautifully on the flowers.

Posted by Caspar Henderson at 22:26