Last year, scientists discovered that [Mantis shrimps] can...see circularly polarised light, which travels in the shape of a helix. To date, they are still the only animal that can see these spiralling beams of light.

The secret lies at a microscopic level. Each eye is packed with light-sensitive cells called rhabdoms that are arranged in groups of eight. Seven sit in a cylinder and each has a tiny slit that polarised light can pass through if it's vibrating in the right plane. The eighth cell sits on top and its slit is angled at 45 degrees to the seven below it. It's this cell that converts circularly polarised light into its linear version.

In technical terms, the eighth cell is a "quarter-wave plate", because it rotates the plane in which light vibrates. Similar devices are also found in camera filters, CD players and DVD players but these man-made versions are far inferior to the mantis shrimp's biological tech. 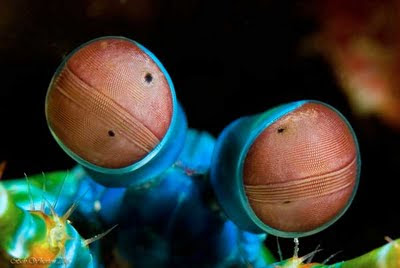 By contrast some of the simplest known eyes consist of only two cells.
Posted by Caspar Henderson at 08:12