From a quarter century ago

Anyone who inquires into the effects of a nuclear holocaust is bound to be assailed by powerful and conflicting emotions. Preeminent among these, almost certainly, will be an overwhelming revulsion at the tremendous scene of devastation, suffering and death which is opened to view. And accompany the revulsion there may be a sense of helplessness and defeat, brought about by an awareness of the incapacity of the human soul to take in so much horror. A nuclear holocaust, widely regarded as "unthinkable" but never as undoable, appears to confront us with an action that we can perform by cannot quite conceive. Following upon these first responses, there may come a recoil, and a decision, whether conscious or unconscious, not to think any longer about the possibility of a nuclear holocaust. (Since a holocaust is a wholly prospective rather than a present calamity, the act of thinking about it is voluntary, and the choice of not thinking about it is always available.) When one tries to face the nuclear predicament, one feels sick, whereas when one pushes it out of mind, as apparently one must do most of the time in order to carry on with life, one feels well again But this feeling of well-being is based on a denial of the most important reality of our time, and therefore is itself a kind of sickness. A society that systematically shuts its eyes to an urgent peril to its physical survival and fails to take any steps to save itself cannot be called psychologically well. In effect, whether we think about nuclear weapons or avoid thinking about them, their presence among us makes us sick, and there seems to be little of purely mental or emotional nature that we can do about it. 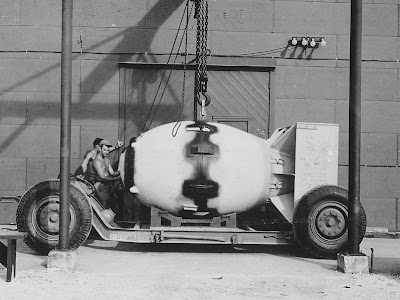 A white whale: Fat Man on a transport carriage, Tinian, 1945
Posted by Caspar Henderson at 18:29