we know that at some point in the far-distant future, our sun will die. This will be at least a billion years, which is "forever" for practical purposes, but we cannot escape the fact that the universe is a temporal creation and so are we. At this point if not before, humans would become extinct. If we are the only conscious life in the universe then that would be that: mind would be gone. So it may be that at some point in the far-distant future, we will have to act as a species to create or recreate a star. Whether or not this actually happens, it’s good to imagine it.

Humans are likely to be long gone before it becomes possible to 'reboot' a star. All the same, Appleton may be right that the thought experiment is worthwhile. David Deutsch anticipated this in The Fabric of Reality (1997):

The colour of the sun ten billion years hence depends...on what people do: what decisions they make, what problems they solve, and on how they behave towards their children.

One could make a case, though, for acceptance. Is an end to all consciousness in the remote future really a bad thing?
For the nearer term, Appleton picks up on Vladimir Vernadsky:

Vernadsky’s humanist utopia would mean a far more vibrant and varied nature than we have at present. The "wider creative possibilities" of reorganising nature around human desires could in fact mean a munificence of animals, plants and ecosystems. Crucially, man is a producer and not just a consumer of nature; part of his productive activity is to make nature, by planting trees, breeding animals, setting up wildlife reserves.

Certainly, given the grim possibilities arising from careless human action, it's good to have a positive vision of the shared ecological future. Almost certainly, humans will increasingly shape nature, including by developing new life forms and, perhaps, intelligences. But caution will be needed in "reorganising nature around human desires." To avoid catastrophe (consequent upon 'darker' aspects of human nature) it may be necessary to reorganise human desires themselves (assuming this can be done at all and, if it can, be done without degrading humans).
Finally, Appleton concludes:

Imaginative possibilities could lay a path for technological and political possibilities, and the slow evolution of a human species consciousness.

I suspect, though, that it is scientific and technological possibilities that lay the path and that, by and large, human imagination and politics follow. 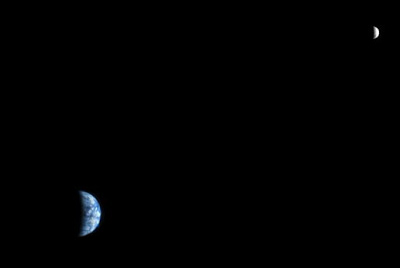 Earth and Moon from Mars orbiter