In A Long, Melancholy Roar, Olivia Judson reflects on the role of predation by other animals on Man has had on the human psyche, observes that Man is the greatest predator on Man, and that no animal besides Man commits suicide. Here is my comment:

I think I've read that some data indicates suicide rates fall during war time. If true, this is interesting, and may be significant.

There's a remarkable account by the late Australian philosopher Val Plumwood of being attacked and almost killed by a crocodile.

Another 'wild' animal that still kills humans is the elephant. The authorities in the Indian state of Orissa report 180 deaths by trampling in the last 5 years (humans had encroached on elephant territory with mining and other operations).

One commonly reads that fewer than a dozen people are killed each year by sharks. Humans, by contrast, slaughter tens of millions of sharks each year.

I'd add that some (e.g. Richard Barry) claim that dolphins have deliberately committed suicide because they are being held captive by humans in conditions that they find unbearable. (Dolphin 'suicides' such as these may be a distinct, perhaps involuntary, phenomenon.) 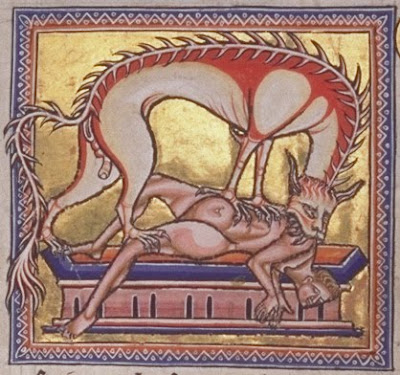 In The Ecocidal Moment, Rowan Williams notes that Alastair McIntosh speaks of:

"ecocidal" patterns of consumption as addictive and self-destructive. Living like this is living at a less than properly human level – McIntosh suggests we may need therapy, what he describes as a "cultural psychotherapy" to liberate us. That liberation may or may not be enough to avert disaster. But what we do know – or should know – is that we are living inhumanly.

Inhumanely, perhaps; but all too humanly.
Posted by Caspar Henderson at 12:02