Report to the Academy

How to keep species alive that seem overwhelmingly threatened with extinction? I've yet to see the remarks made last night by Richard Leakey [1]. On Thursday a debate at the Linnean Society will focus on great apes. [2]

In some parts of the 'real' world, such as Russia, the fate of some large species is less debated. 35 of the 130 gray whales estimated to remain in the Western Pacific are thought to be breeding females. The Sakhalin Energy consortium has promised not to undertake underwater seismic work, but other oil and gas firms working in the region, including BP, Exxon and Rosneft, plan to continue even though this will interfere with their well-being. Perhaps these corporations tell themselves, "why worry? There are 20,000 or more gray whales on the West coast of North America. And these 'ghosts' are toast anyway." 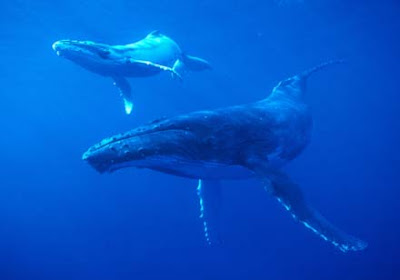 [1] His talk on climate change and extinction will be archived at RoyalSociety.tv. On 19 May the Society hosts a discussion titled Making choices to conserve the world’s species: what, where and when?.

[2] 'The Great Ape Debate', trailed by The Guardian as Experts feud over how to save apes.
Posted by Caspar Henderson at 08:39