It's another reminder that while green, red and brown algae are often called 'plants', some of them have properties that are almost 'animal'-like. [2] Some dinoflagellates, for example, have simple eyes to hunt for food. [3]

And at a macro scale, kelp (which are brown algae) do remarkable things, as Charles Darwin saw:


The number of living creatures of all Orders, whose existence intimately depends on the kelp is wonderful.

A great volume might be written, describing the inhabitants of one of these beds of seaweed….I can only compare these great aquatic forests of the southern hemisphere, with the terrestrial ones in the inter-tropical regions. Yet if in any country a forest was destroyed, I do not believe nearly so many species of animals would perish as would from here, from the destruction of the kelp. [4] 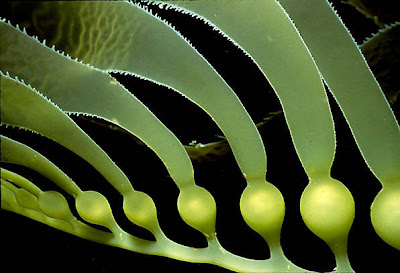 [2] Other 'simple' protists such as forams display remarkable properties too. Lynn Margulis is a microbiological William Blake in her vision of these creatures:


Large single-celled forams choose from brightly colored sand grains the correct ones with which to make shells. Aware of shape and color, they make choices and reproduce their kind. Awareness in some form has been naturally selected for at least 550 million years. For me, our spirituality and moral nature help perpetuate our living communities, just as similar attributes aided previous living communities whose evolution is chronicled in the fossil record.

[3] "By most definitions...the planktonic dinoflagellate, Erythropsidium, must have among the smallest of eyes, since the creature is only 50–70 μm in diameter." -- from You are what you eat by I R Shwab. Others with eyes include: Peridinium foliaceum and P. balticum. See Ultrastructure of Microalgae: nonphotosynthetic plastids.


Almost all the leaves, excepting those that float on the surface, are so thickly incrusted with corallines as to be of a white colour. We find exquisitely delicate structures, some inhabited by simple hydra-like polypi, others by more organised kinds, and beautiful compound Ascidiæ. On the leaves, also, various patelliform shells, Trochi, uncovered molluscs, and some bivalves are attached. Innumerable crustacea frequent every part of the plant. On shaking the great entangled roots, a pile of small fish, shells, cuttlefish, crabs of all orders, sea-eggs, starfish, beautiful Holothuriæ, Planariæ, and crawling nereidous animals of a multitude of forms, all fall out together. Often as I recurred to a branch of the kelp, I never failed to discover animals of new and curious structures.

Darwin was writing about kelp in cool southern waters. But kelp 'forests' have recently been discovered in deep tropical waters too. It's thought that these may act as refugia under some conditions of climate change. 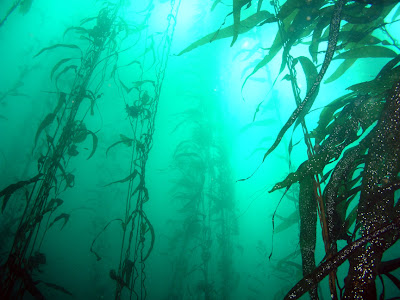 Posted by Caspar Henderson at 09:50