Later the same day, [Tim] Dee watches a family of killer whales swim past. The orcas, he writes in a perfectly weighted Miltonism, "roll forwards like dark planets bowled under the sea". A few minutes later, a fledgling wren flies out of a cliff-top crevice and clings for a few seconds to the strap of his rucksack, before whirring off. "An indifferent wren at four inches, and indifferent killer whales at a mile. The world was good and it didn't need me." Now there's an island thought.

-- from a review by Robert Macfarlane of three books on islands. 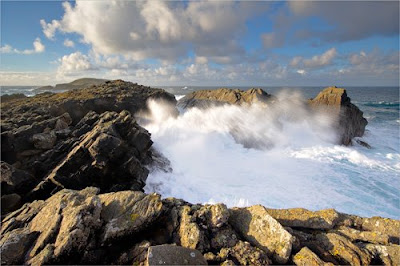 R J Berry, who spent ten years studying mice on Skokholm, quotes Julian Huxley as remembering this was an island where he felt, "perhaps even more than in Africa, the power and independence of nature."

P.S. Compare Dee's observation to The Sea & the Skylark by Hopkins.
Posted by Caspar Henderson at 07:22