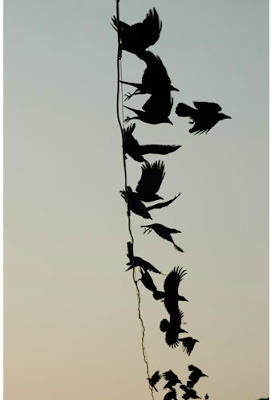 Crows seem to be able to use causal reasoning to solve a problem, a feat previously undocumented in any other non-human animal, including chimps. They also rival primates in ability to deceive.

The storytellers would not be surprised:


[Raven] came to a place where many people were encamped fishing.... He entered a house and asked what they used for bait. They said, "Fat." Then he said, "Let me see you put enough on your hooks for bait," and he noticed carefully how they baited and handled their hooks. The next time they went out, he walked off behind a point and went underwater to get this bait. Now they got bites and pulled up quickly, but there was nothing on their hooks.

-- fragment of a Tlingit story as told by Lewis Hyde.
Posted by Caspar Henderson at 07:40