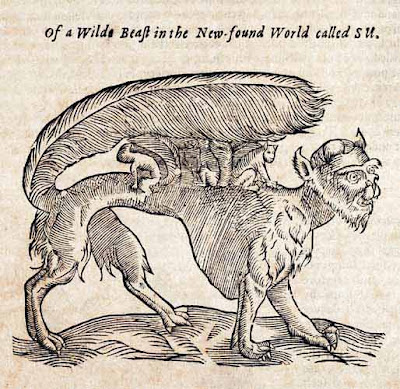 "If Lévi-Strauss is right," wrote Lewis Thomas,"myths are constructed by a universal logic that, like language itself, is as characteristic for human beings as nest-building is for birds." [1]

"Our powerful story [today]," Thomas continued, "equivalent in its way to a universal myth, is evolution. Never mind that it is true whereas myths are not; it is filled with symbolism, and this is the way it has influenced the mind of society."

Medieval bestiaries, he observed, do not contain, as a rule, totally novel creatures of the imagination made up of parts we have never seen before. "On the contrary, they are made up of parts that are entirely familiar. What is novel, and startling, is that they are mixtures of species." [2] 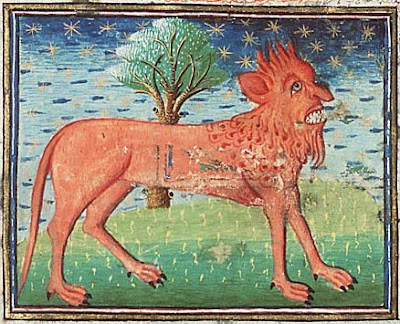 Thomas went on to suggest a bestiary for our time would have to be a microbestiary, featuring the likes of Myxotricha paradoxa, Blepharisma and plant-animal combinations that mostly exist in the sea. Their "meaning", he suggested, would be "basically the same as the meaning of a medieval bestiary. There is a tendency for living things to join up, establish linkages, live inside each other, return to earlier arrangements, get along, wherever possible."

Evolution may be today's "powerful story" [3], at least for those who manage to limit their magical thinking to where it does little harm (or even, possibly, some good [4]). But it is not the only one. Twisted, dark stories seem to fascinate millions.

Hope may come in part from a broader "story" of science -- the systematic achievement of greater knowledge and understanding -- with global projects like the LHC reinforcing the point that the cosmos is more majestical golden fire than foul congregation of vapours. 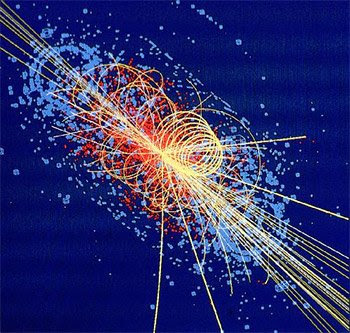 [1] from Some Biomythology published in The Lives of a Cell (1974). But there are several reasons for thinking that Lévi-Strauss explained less than he imagined. To take one example, he cited Sigmund Freud to bolster his case, and Freud was out to lunch on evolution (see, for example, Freud's Evolutionary Fantasy by Stephen Jay Gould) and much else. Still, Thomas's observation about bestiaries seems worth keeping in mind.

[4] (added 17 Sep) Some say a different kind of magical thinking from the one embedded in abstracted monotheisms is precisely what's needed. From David Abrams on The ecology of magic:

When the animate presences with whom we have evolved over several million years are suddenly construed as having less significance than ourselves, when the generative earth that gave birth to us is defined as a soulless or determinate object devoid of sensitivity and sentience, then that wild otherness with which human life had always been entwined must migrate, either into a supersensory heaven beyond the natural world, or else into the human skull itself--the only allowable refuge, in this world, for what is ineffable and unfathomable.