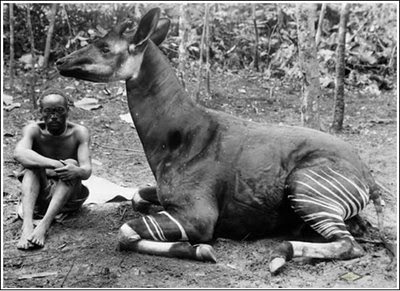 From Congo, a BBC report of "the first official sighting" of an okapi [in the wild] in fifty years.

It's striking from this old photo how large the animal is, even taking into account that the man, who was perhaps Mbuti or Twa, may have been less than five feet tall.

In a recently rebroadcast radio show about the origin of music, Jerome Lewis suggests that one of the purposes of the music of the forest peoples -- in which 3, [8?], 9 and 12 beat songs merge in polyphony -- may be to connect with the "music" of the forest itself: a "technology of enchantment" such that you lose your sense of self and become aware of greater reality.

Lewis Thomas, whose intuitions seem so often to have proven right, wrote (some time before 1974, in The Music of This Sphere):

The need to make music, and to listen to it, is universally expressed by human beings. I cannot imagine, even in our most primitive times, the emergence of talented painters to make cave paintings without there having been, near at hand, equally creative people making song. It is, like speech, a dominant aspect of human biology.