The origin of a light sensitive nerve was almost certainly an early step in the evolution of animal eyes, and this was thought to have happened only once, some 600 million years ago...[1]


...The eyes of a peregrine weigh approximately one ounce each; they are larger and heavier than human eyes. If our eyes were in the same proportion to our bodies as the peregrine's are to his, a twelve stone man would have eyes three inches across, weighing four pounds. The whole retina of a hawks eye records a resolution of distant objects that is twice as acute as that of the human retina. Where the lateral and binocular visions focus, there are deep pitted foveal areas; their numerous cells record a resolution eight times as great as ours. This means that a hawk, endlessly scanning the landscape with small movements of his head, will pick up any point of movement; by focussing upon it he can immediately make it flare up into larger, clearer view...

...Like the seafarer, the peregrine lives in a pouring-away world of no attachment, a world of wakes and tilting, of sinking planes of land and water. We who are anchored and earthbound cannot envisage this freedom of the eye. The peregrine sees and remembers patterns we do not know exist: the neat squares of orchard and woodland, the endlessly varying quadrilateral shapes of fields. He finds his way across the land by a succession of remembered symmetries. But what does he understand?...[2] 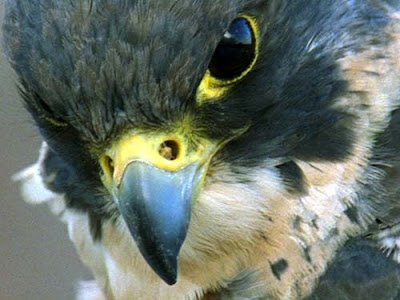 Also, there are humans:


Another thing I have been practicing is wearing the wrong glasses. Now that I have three (or is it five?) different pairs, one for each and every focal distance, I almost always find that I am wearing the wrong glasses for whatever I think I am doing at any given time. This gives me countless opportunities to enjoy a psychedelic blur of the kind we used to seek in the 60s by chemical means, while walking into walls or stepping on my cat Hodge. [3]

1. From Evolutionary origins of a light sensitive nerve

2. From The Peregrine by J A Baker (1967) -- see also Robert Macfarlane's essay. [Another sensibility at the Derby Cathedral Peregrine Project ]