Floating in a most peculiar way 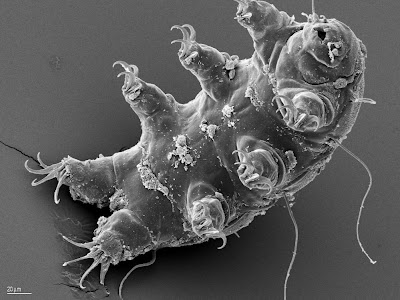 page 322 A greater and more durable [human] presence in space. John Fallows looks at a future mining the Moon and living on Mars. John Quiggin has fun with the arithmetic of interstellar travel.

page 322: Tardigrades in space. Not only the adults but waterbear eggs can survive in space.

page 325: no [animal] apart from Waterbears.  But scientists have found a way of giving insects a coat of armour that may allow them to survive the vacuum of space

This is the twenty-fourth in a new series of notes and comments on chapters in The Book of Barely Imagined Beings. It appears around the time of the US publication, and adds to an earlier series that appeared around UK publication.
Posted by Caspar Henderson at 06:40