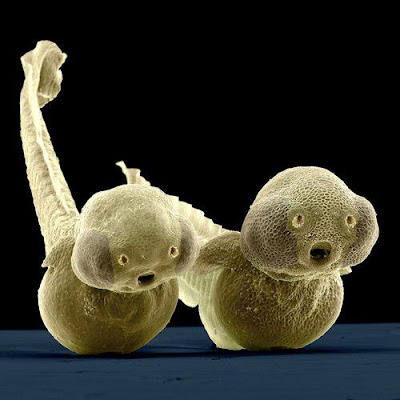 page 369: watching the development. Here is an example of time-lapse of the first 24 hours.

page 369: investigate anything... Zebrafish have recently been made to grow 'pre-hands' instead of fins. Here's an outline of why the zebrafish is many researchers' favourite animal. (Added 24 Jan: as mentioned in an earlier note, zebrafish are being trapped in a virtual world provide a window into complex brain connections.)

page 370: since this book was written Craig Venter and his colleagues have announced the development of the first software simulation of the lifecycle of an entire organism:


The simulation, which runs on a cluster of 128 computers, models the complete life span of the cell at the molecular level, charting the interactions of 28 categories of molecules — including DNA, RNA, proteins and small molecules known as metabolites, which are generated by cell processes.

page 370: reprogramming the code of life. As one article puts it:


DNA is passé. Synthetic biologists have invented an array of new molecules called XNAs that boast all the talents of deoxyribonucleic acid (DNA) and ribonucleic acid (RNA), as well as some special powers. XNAs could allow scientists to safely create life-forms in the laboratory that do not depend on DNA to survive and evolve.

page 371: some harbingers of change are considered artistic or creative.  See, for example, The unnatural art of synthetic biology, A museum of creatures re-engineered by humans, Bio-artists who tinker with tools of science. Here is a picture of Joris Laarman's Halflife Lamp, which is illuminated by hamster cells modified with firefly DNA.

page 371: a sensational earlier life partly captured in the classic headline Now she has her pit bull cloned. But once she manacled a Mormon for sex.

page 373: reverse engineer dinosaurs which does, of course look like rather a mad thing to do, as does recreating Neanderthals.

page 373: scenarios for the future of humanity. Gary Marcus is a long way from addressing them all, but is pretty wise this far:


Edison certainly didn’t envision electric guitars, and even after the basic structure of the Internet had been in place for decades, few people foresaw Facebook or Twitter. It would be mistake for any of us to claim that we know exactly what a world full of robots, 3-D printers, biotech, and nanotechnology will bring. But, at the very least, we can take a long, hard look at our own cognitive limitations (in part through increased training in metacognition and rational decision-making), and significantly increase the currently modest amount of money we invest in research in how to keep our future generations safe from the risks of future technologies.

Posted by Caspar Henderson at 17:20