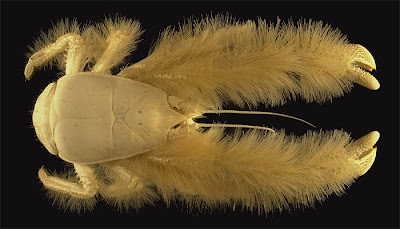 page 355: (marginal note) Carl Woese died in December.  One overview of the man and his ideas here.  Last year, Prof. Woese kindly approved quotes from A New Biology for a New Century on page 140 and 376 of this book.

page 356: variations upon the crustacean body form. A striking example can be seen in these photos of a spider crab and a ghost shrimp. One of my favourites is the Harlequin shrimp: 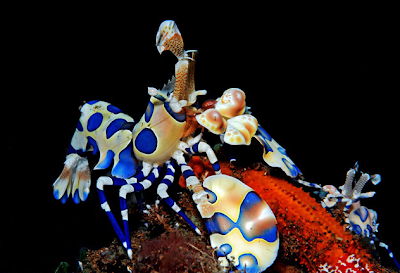 page 359: robots and our attitudes towards them...the start of a mechanical Cambrian explosion.  The military is a major driver. See, for example, the DARPA robot challenge and AlphaDog. Debate on the use of drones, and what comes next is extensive. See here, here or here. In a recent overview Peter W. Singer suggests that:


the biggest ripple effect of the robot...is in reshaping the narrative in [the] realm of war. We are seeing a reordering of how we conceptualize war, how we talk about it, and how we report it.

Robert Ito details some of the quirks of interactions between humans and social robots.  Izabella Kaminska considers the robot economy and the new rentier class. Noah Smith has some suggestions as to how to fairly distribute income and wealth in the age of the robots.

page 360: the place where life emerged from non-life.  Previous posts on this topic are collected under the label Origin.  See also The beginnings of life: Chemistry’s grand question.  Jack Szostack suggests that somewhere on Earth, over 3.5 billion years ago, a bubble of fat spontaneously broke into smaller ones, giving rise to one of life's most fundamental properties - the ability to make copies of itself.

page 362: a stream of order. Vlatko Vidral makes a case for information as the surprise theory of everything.

page 364: travel to the bottom of the sea. The biggest driver for doing so is likely to be resource extraction. See A Gold Rush in the Abyss and this article arguing exploration is inevitable. More reports here and here.
Posted by Caspar Henderson at 17:49