Why isn't the world full of pogonophora?

We could say that clade selection has occurred when a clade, such as the insects, spreads, diversifies and populates the world more successfully than another clade such as the pogonophora (no, you probably haven't heard of these obscure, worm-like creatures, and there's a reason: they are an unsuccessful clade!)...

Perhaps partly because of its segmentally modular architecture, the arthropod clade is good at evolving, at throwing up variation in multiple directions, at diversifying, at opportunistically filling niches as they become available. Other clades may be similarly successful because their embryologies are constrained to mirror-image development in various planes. The clades that we see peopling the lands and the seas are the clades that are good at evolving. In clade selection, unsuccessful clades go extinct, or fail to diversify to meet varying challenges: they wither and perish. Successful clades blossom and flourish as leaves on the phylogenetic tree.

-- Richard Dawkins speculates on 'the evolution of evolvability'. An extract from The Greatest Show... featured in the 300th edition of Edge. 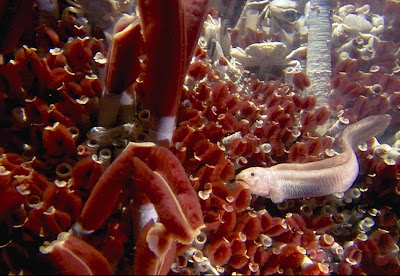 Posted by Caspar Henderson at 17:45