In my search for a [new] word, I asked Bernd Brunner what he thought some good options were in German.

Wunderentdeckung(s)verlustschmerz (which I took as 'wonder-discovery-loss-pain') is, he says, 'interesting, but as a construction it sounds too heavy.' Wunder is more like miracle than wonder. One option could be:

Trauer (grief) may, he thinks, work better than Schmerz (pain). Another option could be:

Schauer, he says, is a feeling that can run over your back when you are mildly scared. 'Or is this too feeble to express what you are trying to say?' It is his preferred option at present: a newly made up word, and enigmatic.

He also mentions Verlustangst (the fear of losing something close to you) and Verlustschmerz (the pain of loss). And then there is Weltschmerz, 'a kind of global melancholia or saudade, as the Portuguese say: a deep feeling of grief over a generally felt loss. Could it be extended to Schöpfungs-Weltschmerz, Biologischer Weltschmerz?'

German has distinct words for extinction caused by humans: Ausrottung, and for extinction without human agency: Aussterben. I suppose we do in English too. For the former we say 'extermination.' 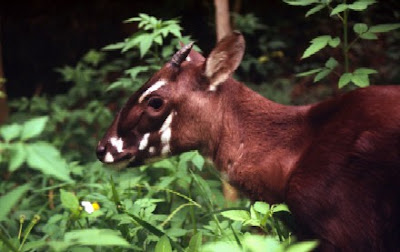 The Saola (Pseudoryx nghetinhensis) is listed as Critically Endangered on the IUCN Red List of Threatened Species™. 'With none in zoos and almost nothing known about how to maintain them in captivity,' notes an IUCN press release, 'extinction in the wild would mean the Saola's extinction everywhere, with no possibility of recovery and reintroduction.'

Posted by Caspar Henderson at 01:03

Email ThisBlogThis!Share to TwitterShare to FacebookShare to Pinterest
Labels: extinction