'Finally we built our porcupine mother...'

The first of these monsters was a cloth monkey mother who, upon schedule or demand, would eject high-pressure compressed air. It would blow the [infant macaque's] skin practically off its body. What did this baby monkey do? It simply clung tighter and tighter to the mother, because a frightened infant clings to its mother at all costs. We did not achieve any psychopathology.

However, we did not give up. We built another surrogate monster mother that would rock so violently that the baby's head and teeth would rattle. All the baby did was cling tighter and tighter to the surrogate. The third monster we built had an embedded wire frame within its body which would spring forward and eject the infant from its ventral surface [i.e., its front]. The infant would subsequently pick itself off the floor, wait for the frame to return into the cloth body, and then again cling to the surrogate.

Finally we built our porcupine mother. On command, this mother would eject sharp brass spikes over all of the ventral surfaces of its body. Although the infants weredistressed by these pointed rebuffs, they simply waited until the spikes receded and then returned and clung to the mother.

-- from a description of the Surrogate mother experiment conducted by Harry F. Harlow and Stephen J. Suomi at the University of Wisconsin in the late 1960s.
The account is quoted by James Rachels in Chapter 5 of Created From Animals: The Moral Implications of Darwinism. 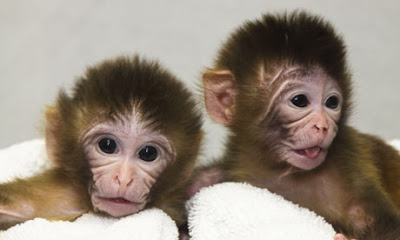 Posted by Caspar Henderson at 07:44

Email ThisBlogThis!Share to TwitterShare to FacebookShare to Pinterest
Labels: primates