The sound was out of place. "Here we were, far from the sea in the middle of the rain forest, and through the great trees came a sound like waves drawing across a massive pebbly beach". It was, Lee White soon saw, a big troop of Mandrills sorting through the leaf litter in search of food. The encounter set him on a path of research and discovery that helped to revolutionize understanding of these colorful monkeys and do more to protect them. [1]

Now, as a representative for the government of Gabon, White tries to negotiate the best deal for his country not to fell the forests where the Mandrill and other amazing species live [2] by getting those forests recognised as carbon stocks within the UNFCCC. [3] 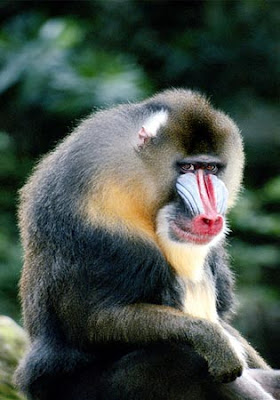 Nearly 2.3 million square kilometres of rainforest in the Congo basin countries are estimated to contain carbon equivalent to about 15 years worth of anthropogenic emissions at current rates, and be 'worth' about US$1.25 trillion at current market prices. [4] To a non-market fundamentalist the logic and the numbers may seem surreal.

Gabon is relatively fortunate in being more sparsely populated and better governed than some of its neighbours.  [5] Its rainforests may be quite robust under some climate change scenarios. One of the 'nightmares' would destruction that arises as a consequence of greater climate change elsewhere: if, for example, some decades from now millions or tens of millions of people try to escape a West African dust bowl by migrating this way. [6] 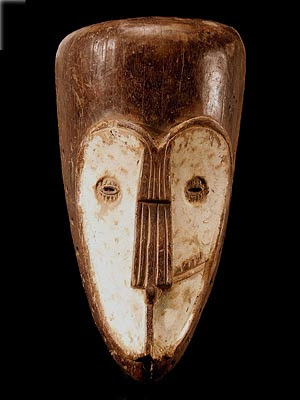 [1] Mandrills live very differently from baboons, whom they superficially resemble, in groups that can be more than 600 strong.

[2] The range of species still hanging on in the Congo basin is vast. In Gabon it includes the Sun-tailed monkey (one of those names that definitely sounds better in French: Singe au queu de soleil), a survivor in what was a forest refugium during the Pleistocene.
[3] (added 22 March): See, for example, 'Crunch year' for world's forests.

[5] (added 18 May) The country's relatively intact biodiversity persists in some of its coastal areas too.  The 'world's largest' colony of Leatherback turtles has recently been found there.
[6] There has been substantial human migration in the past. Bantu peoples equipped with iron tools, banana plants and oil palm seeds swept down this way about 2600 years ago. The population crashed more than a 1000 years ago, and huge mahogany forests now grow in places that were extensively settled. But the size of a human migration in the 21st century could be greater might by two or more orders of magnitude.
Posted by Caspar Henderson at 07:49