Edward Hoagland, now 77, writes[1] that he welcomes his own imminent death for two reasons: it will make him part the natural processes he loves, and it will mean he will not have to see future horrors:

I’ve widened my allegiances beyond socialism toward Creation as a larger whole; salamanders, beech trees, not just autoworkers...

...accepting death as a process of disassembly into humus, then brook and finally seawater demystifies it for me. I don’t mean that I comprehend bidding consciousness goodbye. But I love the rich smell of humus, of true woods soil, and of course the sea – love the rivulets and brooks, lying earthbound, on the ground. The question of decomposition is not pressing or frightening. From the top of the food chain I’ll re-enter at the bottom. [2]

…I’d rather be a goldfinch eating dandelion seeds than witness, even on a TV screen, some of the scenes in store. Dacca drowning; people eating processed algae. I won’t be, you won’t be, but rather than observing the gradual meltdown, wouldn’t you prefer incarnation as a blue-tailed skink hunting crickets on a pine-log?

…Because my concept of democracy as the right to live widens beyond Homo Sapiens, and because I knew an orangutan when I was young, the death of his whole life-form will seem such a particularly genocidal tragedy to me – like that of chimps, the great whales, elephants, and other megafauna I’ve been privileged to encounter on occasion – that I want my personal extinction to proceed theirs. It will anyway, but I don’t want to live in a world drained of elephants and sharks and whales, where my grief over how we’ve treated captive apes is dwarfed when the last carcasses are concealed under the loads on log trucks to be cooked as bushmeat in Kinshasa’s slums. Better to be already simmering in the soil myself.

The sentiment is genuine enough, but is Hoagland right to assume things will go so badly? [3] At one point he allows for a small hope. What if this is more on target?

It’s not far fetched to conceive...of a sea change in how we allocate pity and reverence in the years ahead. 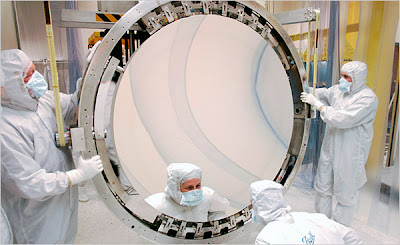 2. The much younger and still vigorous George Monbiot expresses the same sentiment in a column in 2005:

As a gardener and ecologist, I find [disaggregation] oddly comforting. I like the idea of literal reincarnation: that the molecules of which I am composed will, once I have rotted, be incorporated into other organisms. Bits of me will be pushing through the growing tips of trees, will creep over them as caterpillars, will hunt those caterpillars as birds. When I die, I would like to be buried in a fashion which ensures that no part of me is wasted. Then I can claim to have been of some use after all.

I aspire to a similar state of mind, but wonder if in the event I will be more like Willie Parker, the character played by Terence Stamp in a gangster film called The Hit. Parker boasts equanimity in the face of death but when actually confronted with execution breaks down.

3. Grim as things are, we need to beware catastrophising. (David Hume would agree!)

image: the primary mirror for the Kepler telescope
Posted by Caspar Henderson at 14:15