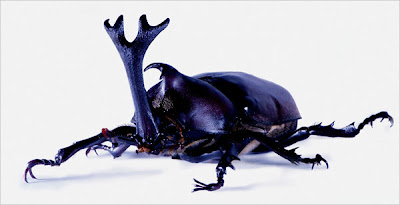 the more baroque weapons, even though they look more fearsome, seem to cause lesser loss of life. The reason is that the more menacing weapons have often acquired a signaling role. Instead of risking their lives in mortal combat, males can assess each other’s strengths by sizing up a rival’s weapons, and decline combat if they seem outclassed. The ornate weapons also lend themselves to ritualized combat in which males may lock horns and assess each other’s strength without wounding each other.

-- from report on a hypothesis by Douglas J. Emlen and others.

Stockpiles of nuclear weapons large enough to destroy human life several times over may play a similar role...so long as they are not used!

Email ThisBlogThis!Share to TwitterShare to FacebookShare to Pinterest
Labels: invertebrates