P Z Myers reflects on teratology, and its lessons for human dignity.

We should, [Bacon] says, study deviant instances. "For once a nature has been observed in it variations, and the reason for it has been made clear, it will be an easy matter to bring that nature by art to the point it reached by chance." Centuries ahead of his time Bacon recognised that the pursuit of the causes of error is not an end in itself, but rather just a means. The monstrous, the strange, the deviant, or merely the different, he is saying, reveal the laws of nature. And once we know those laws, we can reconstruct the world as we wish. [1] 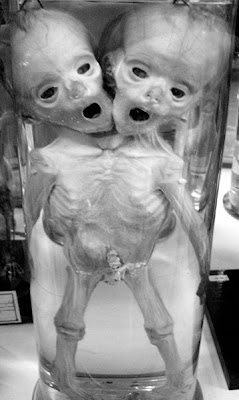 Email ThisBlogThis!Share to TwitterShare to FacebookShare to Pinterest
Labels: Teratology