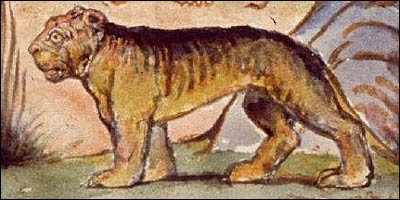 Weighted balls that simulate struggling prey for tigers in zoos, contraception for elephants: yes, these (and much else in the discussion and her book) are worth serious thought -- not least that humans are hereby taking control of, or at least playing a key role in, not only the survival (or otherwise) of existing species but also their future evolution.

Natural selection -- including, for example, the evolution of faster and more subtle prey -- framed the tiger's fearful stealth and strength. What will a ball on a string, or a robot, do?

Plenty of what humans do has inadvertent selectionary pressures, of course. Propeller and artificial noise in the oceans, for example, has shrunk the auditory world of whales from hundreds or even thousands of miles into a 'tiny bubble' (says Christopher Clark as reported by Stephen Palumbi): in that case, we are 'selecting' for the diminishment or even the end of one of the world's greatest musical wonders.

As Stephen Palumbi has said, "it is time we started taking responsibility for our evolutionary actions. "
Posted by Caspar Henderson at 09:06