A right to become

Jessica Loudis considers Ecuador's passage of a Rights of Nature Act [1] in the light of the thinking of Hannah Arendt, "one of the founders of modern human rights theory", but with this caveat:


In The Origins of Totalitarianism, Arendt noted that one of the greatest perils to human rights was that it could lapse into the rhetoric of animal rights...thus losing sight of the fundamental dignity of man. In light of this concern, while Arendt is a helpful tool for evaluating the RoN, I'm certain that she would have loathed the application of her thinking in this context.

Perhaps not. I wonder whether Arendt, were she alive today, would agree with Martha Nussbaum [2] on the case for recognizing rights (among them a right to flourish) for entities outside traditional categories, including non-human animals, and would not see these as incompatible with human dignity or in any way demeaning of it.

Loudis also suggests that Arendt's concept of natality, or "the capacity for beginning," is helpful when thinking about how to treat the Ecuadorian Act:


For Arendt, natality signifies not just birth, but also the possibility of radical newness, of remaking the world over and over again through "the entry of a novel creature... as something entirely new." Natality, in other words, is the thing that both enables politics and also saves it from itself through offering the possibility of renewal, and as such, the possibility of difference.

I'd like to suggest a broader conception of natality than Arendt had in mind may be helpful. We should think not only about the individual or the species, important as those are, but also about what species and assemblages of species in ecosystems have the potential to evolve into. As Tom Bailey writes:


What is worth considering is how it could be possible to conserve what biologically might exist – to adopt Gould’s coinage, the “morphospace” of an organism, its theoretical ‘adaptive landscape’ of what might evolve from it in a certain timescale. To push the boat even further: How should we go about conserving hypothetical organisms, of which we have no certain idea that they will ever exist in the future? Do we have an obligation to do so? 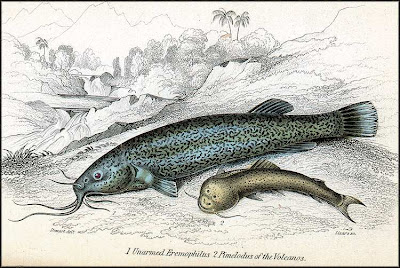 Pimelodus cyclopum, known today as Astroblepus cyclopus or Preñadilla, 'the little pregnant one'. "Volcanoes vomiting fish is such a common phenomenon, and so well-known among all the local inhabitants, that there can not be the slightest doubt of its authenticity" -- Alexander von Humboldt.

2. Frontiers of Justice (2006) . See also Human being and Twisting the sinews.
Posted by Caspar Henderson at 09:06

The irony, after 8 years from the post and from the adoption of the "rights of nature" post in the Ecuadorean constitution, is that the preñadillas, the fish featured in the illustration, are dissapearing from the Andean rivers because of the promotion by the government of both the breeding of introduced fish species and large scale mining throughout the country.