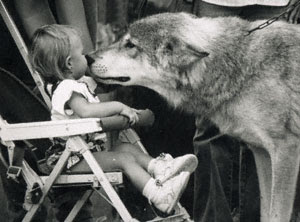 In Train Dreams, Denis Johnson tells of a child that has been raised by wolves and has become wolf-like.  The description is especially vivid, as if the reality were seen by flashes of lightning.

Is it credible, though, that a child can adapt and change to such a degree?  Most supposedly documented cases of wild children turn out to be bogus or distorted.  Even so, intelligent people continue to find them plausible.  Shinichi Suzuki included the following in his book Nurtured By Love (English translation 1983):


In 1941, two professors from Denver and Yale universities received an account of a valuable piece of research. A priest in India had found two small children who had been raised by a wolf. One was about two years old and the other about seven...The discovery was made northwest of Calcutta in a jungle zone...
Head, breast and shoulders of both children were covered with thick hair, After it was cut, they looked like human beings.
In the wolf's cave, the infants crawled on all fours, their eyes seeing clearly in the dark. Their noses were extremely sensitive. They ran fast on all fours, like a dog, and people could not overtake them. Their shoulders were wide, their legs powerful, with bent thighs that would not stretch out straight. They grasped things with their mouths, not with their hands...