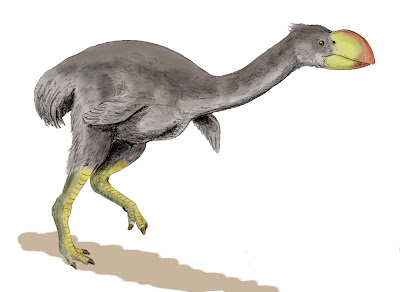 On page 298 of The Book of Barely Imagined Beings I describe Stirton's Thunder Bird, which could grow three metres tall and weigh half a tonne as "probably the largest bird ever to have lived."

Sebastian Robinson, a reader, recently got in touch with the following:


According to my limited information (Extinct Birds by Errol Fuller), there have in historic times been birds both taller than Stirton's, and about as heavy.

According to Fuller, the moas (genus Dinornis) "were all truly spectacular birds, the tallest known examples towering to heights in excess of 3.6m (12 ft)."  Just when they died out seems to be a confused and controversial question, but at least one species is listed as having disappeared after 1600 -- and there are vague reports of individual giant flightless birds in New Zealand as late as the 19th century.

When it comes to heavy birds, Aepyornis maximus, the Elephant Bird of Madagascar, seems from its remains to have been pretty much in the Stirton's class: an estimate (Amadon 1947) put the weight of A. maximus at 454 kg (1,000 lb), or about three and a third times the weight of a full-grown ostrich. Fuller suggests a potentially limiting factor to even larger size: "Engineers calculate that structurally and functionally it is impossible for an egg to be bigger [than Aepyornis's 30-cm long monster]; they may not be right, of course!"

Drawing of Dromornis stirtoni by Nobu Tamura.
Posted by Caspar Henderson at 06:26

Email ThisBlogThis!Share to TwitterShare to FacebookShare to Pinterest
Labels: extinction