The clubs of the Peacock mantis shrimp Odontodactylus scyllarus withstand repeated very large shocks thanks to the jagged structure of chitinous fibers, which run at cross-angles. [1]  A similar solution was developed for Roman shields (report, paper).

Gonodactylus Smithii, a Mantis shrimp featured in The Book of Barely Imagined Beings,  also uses super-fast clubs to kill its prey.  But I still think its eyes are its most marvelous feature. 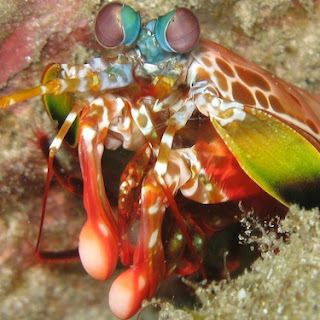 Note [1] Or as the original research paper puts it


Consisting of multiphase composite of oriented crystalline hydroxyapatite and amorphous calcium phosphate and carbonate, in conjunction with a highly expanded helicoidal oraganization of the fibrillar chitinous matrix, these structures display several effective lines of defense against catastrophic loading during repetitive high-energy loading events.

Posted by Caspar Henderson at 05:41