All Watched Over by Dragonflies, Fleas and Dogs 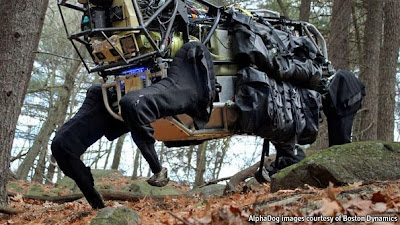 Military technology, unsurprisingly, is at the forefront of the march towards self-determining machines (see Technology Quarterly). Its evolution is producing an extraordinary variety of species. The Sand Flea can leap through a window or onto a roof, filming all the while. It then rolls along on wheels until it needs to jump again. RiSE, a six-legged robo-cockroach, can climb walls. LS3, a dog-like robot, trots behind a human over rough terrain, carrying up to 180kg of supplies. SUGV, a briefcase-sized robot, can identify a man in a crowd and follow him. There is a flying surveillance drone the weight of a wedding ring, and one that carries 2.7 tonnes of bombs.

-- Robot ethics: morals and the machine

One reason we don’t have robot factories is because roughly 95 percent of robotics research funding has been channeled through the Pentagon, which is more interested in developing unmanned drones than in automating paper mills.

Posted by Caspar Henderson at 07:10