The chameleon, the octopus and the fox-terrier

The scepticism of Michel de Montaigne shares something with the pragmatism of William James. Here's Montaigne:

The chameleon takes on the colour of its surroundings but the octopus assumes whatever colour it likes to suit the occasion, hiding, say from something fearful or lurking for its prey. The chameleon changes passively, the octopus actively. [sic] We change hue as well, from fear, anger shame and other emotions which affect the colour of our faces. That happens to us, as to the chameleon, passively. Jaundice, not our will, has the power to turn us yellow.

Such characteristics in other animals which we realize to surpass our own show they they have, to an outstanding degree, a faculty which we classify as ‘occult’. Similarly, animals probably have many other characteristics and powers which are in no way apparent to us.

...Let an intelligent man imagine human nature created, from the beginning, without sight: let him reflect how much ignorance and confusion such a defect would entail, how much darkness and blindness there would be in our minds. We can see from that how vital it would be for our knowledge of truth if we lacked another sense, or two or three senses. We have fashioned a truth by questioning our five senses working together; but perhaps we need to harmonize the contributions of eight or ten senses if we are ever to know, with certainty, what Truth is in essence. [1]


Take our dogs and ourselves, connected as we are by a tie more intimate than most ties in this world; and yet, outside of that tie of friendly fondness, how insensible, each of us, to all that makes life significant for the other!—we to the rapture of bones under hedges, or smells of trees and lamp-posts, they to the delights of literature and art. As you sit reading the most moving romance you ever fell upon, what sort of a judge is your fox-terrier of your behavior? With all his good will toward you, the nature of your conduct is absolutely excluded from his comprehension. To sit there like a senseless statue, when you might be taking him to walk and throwing sticks for him to catch! What queer disease is this that comes over you every day, of holding things and staring at them like that for hours together, paralyzed of motion and vacant of all conscious life? The African savages came nearer the truth; but they, too, missed it, when they gathered wonderingly round one of our American travellers who, in the interior, had just come into possession of a stray copy of the New York Commercial Advertiser, and was devouring it column by column. When he got through, they offered him a high price for the mysterious object; and, being asked for what they wanted it, they said: "For an eye medicine,"—that being the only reason they could conceive of for the protracted bath which he had given his eyes upon its surface.

...And now what is the result of all these considerations [and others outlined in the longer article]? It is negative in one sense, but positive in another. It absolutely forbids us to be forward in pronouncing on the meaninglessness of forms of existence other than our own; and it commands us to tolerate, respect, and indulge those whom we see harmlessly interested and happy in their own ways, however unintelligible these may be to us. [2] 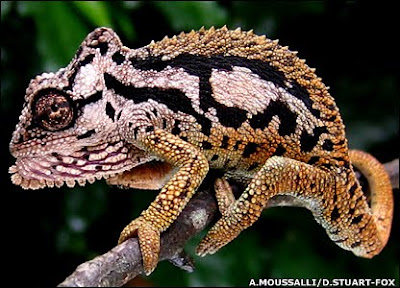 [1] Apology for Raymond Sebond (1576). [Montaigne repeats a fallacy still widespread today that chameleons only change colour to camouflage themselves. In fact, some species also change into bright colours for display purposes. But his main point -- that some animals, such as the octopus, possess capacities that humans do not -- still holds.]