A fish imagined by the Jero tribe

Bol is a large fish and is known to swallow big animals such as pigs. It hides its head in the seabed, in the sand and can be recognized by the Andamanese easily as it rests in the muck, in shallow water near the bay area. 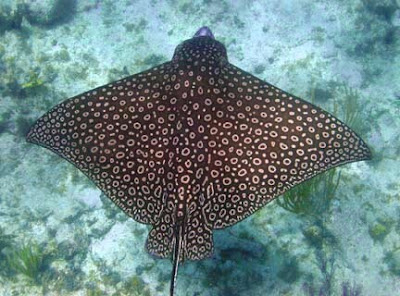 Image: a Spotted eagle ray, which I guess to be an inspiration for the Bol. The largest things this ray eats are shrimps and crabs but with a wingspan of up to three metres, or ten feet, you can see how people might imagine it could eat something much larger.

Footnote
[1] The death of the last fluent speaker of Andamanese language of Bo was reported this week (Survival International, BBC). Razib Khan at Gene expression is vexed by hype and misleading statements. And he's right that the Andamanese are not the ancestors of other living people and that their language is no older than anyone else's. But he misses a main point: with their passing the world loses ways of being.
Posted by Caspar Henderson at 06:58