Most of the spiral galaxies that decorate our universe have emerged from surprisingly violent pasts, it is reported. They grew their delicate spiral arms after being mashed into a pulp by vast collisions.

Our own spiral galaxy, the Milky Way, is probably one of the few exceptions. It has rotated serenely, undisturbed except by the impact of a few small dwarf galaxies, for about eleven billion years.

It's predicted, however, that Milky Way will collide with the Andromeda Galaxy in about two and half billion years. The resulting 'hyperkinetic smashup' is likely to result in something that looks like this, the colliding Antenna Galaxies: 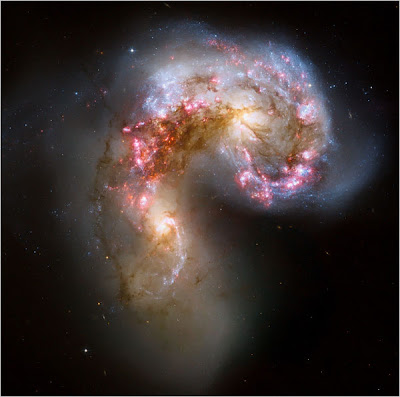 Posted by Caspar Henderson at 13:59

Email ThisBlogThis!Share to TwitterShare to FacebookShare to Pinterest
Labels: cosmology