There seem to be certain constants which all cultures have found 'beautiful': among them -- certain flowers, trees, forms of rock, birds, animals, the moon, running water.

One is obliged to acknowledge a coincidence or perhaps a congruence. The evolution of natural forms and the evolution of human perception have coincided to produce the phenomenon of a potential recognition: what is and what we can see( and by seeing also feel) sometimes meet at a point of affirmation. This point, this coincidence, is two-faced: what has been seen is recognized and affirmed and, at the same time, the seer is affirmed by what he sees. For a brief moment one finds oneself -- without the pretensions of a creator -- in the position of God in the first chapter of Genesis...And he saw that it was good. The aesthetic emotion before nature derive, I believe, from this double affirmation.

Yet we de do not live in the first chapter of Genesis. We live...in a world of suffering in which evil is rampant, a world whose events do not confirm our Being, a world that has to be resisted. It is in this situation that the aesthetic moment offers hope... 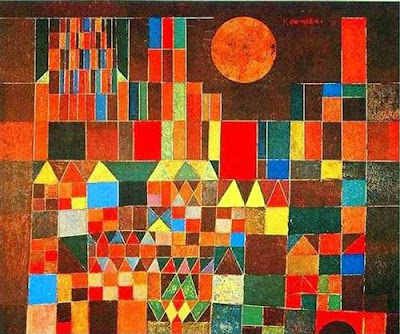 ...Art does not imitate nature, it imitates a creation, sometimes to propose an alternative world, sometimes simply to amplify, to confirm, to make social the brief hope offered by nature. Art is an organized response to what nature allows us to glimpse occasionally. Are sets out to transform the potential recognition into an unceasing one.

Related: Nicholas Humphrey On beauty.
Posted by Caspar Henderson at 09:22