Chris Jordan's photographs of the plastic in the stomachs of baby albatrosses on Midway atoll are, he says, an attempt to communicate what is "an incredible tragedy symbolic on many levels":

Before going out there we met with a group of Hawaiian elders and received their teachings from Hawaiian spiritual tradition..one of the women said to me ‘don’t think of the birds as being victims. She said in the Hawaiian tradition they are sentient beings intentionally bringing to themselves the garbage of the world as a way of passing on a message. And whether or not you accept that as being true, I thought it was fascinating this idea that there’s a message that is being transmitted through the death of these birds...

...It was a very bizarre experience to feel the aesthetic beauty of something so horrible and yet [it] can be a portal...If I took ugly photographs of a scary subject no one would want to look at them. So I think by presenting these things in a beautiful way it not only honors the complexity of the issue, it also draws the viewer into...a difficult conversation with himself that he might not otherwise be willing to have. 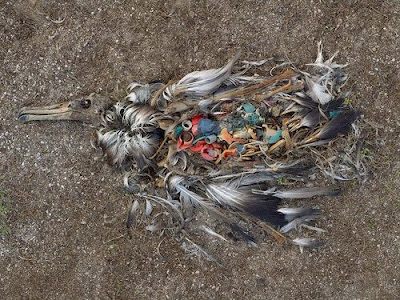 In a statement on his web site, Jordan says:

...The immense scale of our consumption can appear desolate, macabre, oddly comical and ironic, and even darkly beautiful; for me its consistent feature is a staggering complexity.

The pervasiveness of our consumerism holds a seductive kind of mob mentality. Collectively we are committing a vast and unsustainable act of taking, but we each are anonymous and no one is in charge or accountable for the consequences. I fear that in this process we are doing irreparable harm to our planet and to our individual spirits.

As an American consumer myself, I am in no position to finger wag; but I do know that when we reflect on a difficult question in the absence of an answer, our attention can turn inward, and in that space may exist the possibility of some evolution of thought or action. So my hope is that these photographs can serve as portals to a kind of cultural self-inquiry. It may not be the most comfortable terrain, but I have heard it said that in risking self-awareness, at least we know that we are awake.

All of this is convincing and useful. But we also need the phrase 'intolerable ugliness'.
Posted by Caspar Henderson at 21:02

Whoa. Thank you for drawing my attention to this. Unbelieveable.