'Stabs us from behind with the thought...' 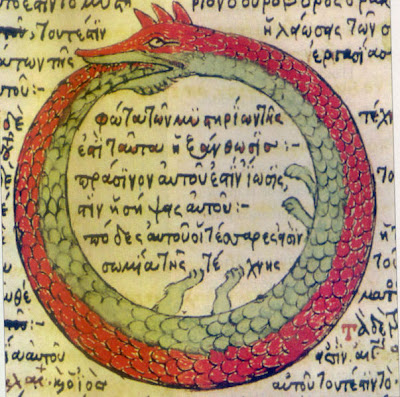 Another mention of Borges in today's Guardian is made by Ian McEwan in an article on the challenge of climate change:

The fictional head of a snake has begun to devour its actually existing tail - a circularity the great Argentinean fabulist, Jorge Luis Borges, would have appreciated.

McEwan employs the circular snake, Ouroboros, as a metaphor for how fears and imaginings can take over reality. This post notes a few points about the use of Ouroboros in myth. Wikipedia begins with the 'upside':

Ouroboros often represents self-reflexivity or cyclicality, especially in the sense of something constantly re-creating itself, the eternal return, and other things perceived as cycles that begin anew as soon as they end.

To us the ocean is a sea or a system of seas; to the Greeks it was a simple circular river that ringed the land mass. All streams flowed from it [sic] and it had neither outlets nor sources.[1]

But he concludes with some darker lines on Midgardsormr (or Jörmungandr), the world-circling serpent of Norse mythology, which will devour the earth at the Twighlight of the Gods.

One could add that Wally Broecker's climate beast, should it exist, probably dwells in the deep.

If unstoppable and catastrophic change is already locked into the system, then perhaps the more appropriate metaphor comes from Lucian who, as Philip Hoare notes:

told of a whale [2] one hundred and fifty miles long in which was contained an entire nation and men who believed themselves to be dead, years after they were first engulfed.

[1] Martin Rees uses Ouroboros to link the smallest particles to the cosmos as a whole:

The way stars shine depends on nuclei within those atoms. Galaxies may be held together by the gravity of a huge swarm of subnuclear particles.

[2] Sometimes, no distinction was made in ancient minds between whales and sea serpents.