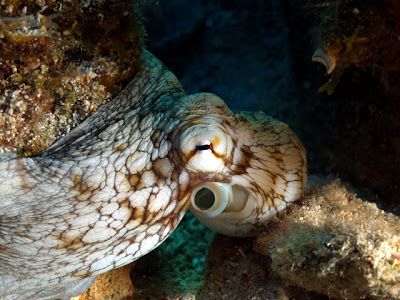 As intelligent creatures go, cephalopods are perhaps the most "other" that we know; think of them as a dress rehearsal for the far-off day when we might encounter intelligent aliens. Cephalopod researchers love to share the latest stories about clever octopuses or emotional cuttlefish—stories that often involve daredevil escapes from aquarium tanks. In [a video made by Roger Hanlon], an octopus on a coral reef crosses a dangerous open stretch between coral heads. The animal assumes the posture, pattern, and coloration of a coral head, then stands on its tippy toes and slowly moves across open ground. The only things moving are the tips of the arms; the rest of the animal appears stationary. But here is the clever part: In shallow water at midday on a sunny, choppy day, intense shadows and light sweep across everything. Not only does the "moving rock" mimic them, it is careful to not exceed the speed of these light effects. It is fully aware of its appearance under changing conditions.