Zoos of the mind

In "The Bauhaus of Nature"... Peder Anker argues that the architect intended his design to do more than delight:

'Using penguins as an example, [Berthold Lubetkin] argued that "the most unlikely animals seem to thrive under what would seem the most unnatural conditions [provided that they] gain freedom from enemies, regular food and general hygiene." The same would hold for workers and the poor who were in desperate need of being liberated from their "natural" condition of criminal and filthy slums...The health and welfare of people and animals were of equal concern, and the new architecture was to promote it.'

If the zoo seems an unlikely site of socialist ideology that's because it has come to be an unlikely home for any value but the conservation of wildlife; prevailing wisdom is that such a value isn't best expressed by geometric forms or large gray slabs or Victorian gables, but by design that mimics wilderness.

Yet there are exceptions: The Berlin Zoo's hippopotamus enclosure, built in 1997, is a tree-ringed lake covered by a soaring glass dome with a diamond-patterned support structure that undulates. In 2006, the New York Aquarium...launched a competition to redesign the exterior of its Coney Island home. The finalists included plans for a giant pink jellyfish with spiraling tendrils that create an open pavilion several stories high. The winning design reframes the structure with a long, tall fence that mimics the waves of sand and sea; a dune conceals an underground parking lot. (In 2008, the entire project was scrapped over costs and a decision to focus on interior renovations.) A Danish firm's winning design for the new Denmark Aquarium set to open in Copenhagen in 2013 is a giant pinwheel. It is based on biological flows: "the whirl streams of the sea, shoals of fish, and swirling starlings turning the sky black," according to the firm. Wilderness becomes, then, not the goal, but the inspiration.

-- from Jesse Smith on the architectural history of zoos 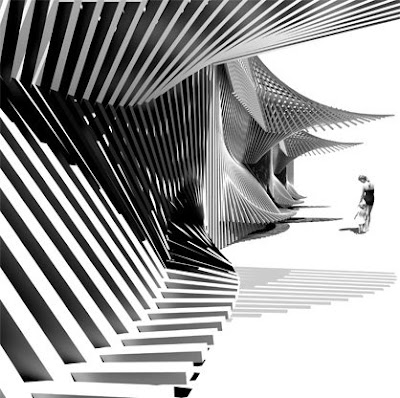 Posted by Caspar Henderson at 09:28

Email ThisBlogThis!Share to TwitterShare to FacebookShare to Pinterest
Labels: Zoos