You may think there will be less Change than I am suggesting, and you may be right, but it is hard for me to see why. It is possible that the sorts of understanding and the skills in creation needed to fundamentally reshape the human being are simply not available to our intellects, or to the ways we act upon knowledge. But look at the progress of the past hundred years - the progress that weighs isotopes by stratospheric chemistry in the Archaean, and reads the genomes of chloroplasts, that lets us build pictures of the atomic machines that pull apart water molecules and weigh the chlorophyll content of whole oceans by staring down from space - and ask yourself if understanding and reshaping the mechanisms of the mind is really likely to be entirely beyond us.

...in the churchyard overlooked by the Long Man sits a yew that may be two thousand years old. Men who fought at the Battle of Lewes could have cut their bows from it; now it is celebrated in the Norman church beside it by a wonderful new stained-glass window based on micrographs of yew wood, the sunshine streaming through its representations of stomata like wounds of the living Christ. This yew and its ancient brethren scattered across the landscape could, I increasingly suspect, outlive the human race, or at least see the first flowering of its successors. 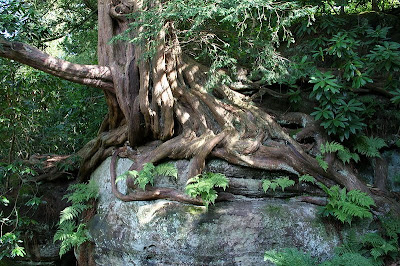 Email ThisBlogThis!Share to TwitterShare to FacebookShare to Pinterest
Labels: transhumanism