Travellers who crossed Siberia in the eighteenth century noted the remarkable animals they saw -- elk "of monstrous size," fierce aurochs, wild boars, wild horses and asses, flying squirrels in great numbers, foxes, hares, beavers, bears. Of the swans, cranes, pelicans, geese, ducks, bitterns, and other birds, one traveller wrote, "After sundown these manifold armies of winged creatures made such a terrific clamour that we could not evern hear our own words." Philipp Johann von Strahlenberg, a Swede captured by Peter the Great's army at the Battle of Poltava in 1709, and sent with other Swedish prisoners to Siberia, wrote that the species had six species of deer, including the great stag, the roe deer, the musk deer, the fallow deer and the reindeer. He also mentioned a special kind of bird whose nests were so soft that they were used for socks. About two hundred and ninetey years later in Siberia, I saw none of these marvels, except in museums, where some of the specimins are facing a second extinction from moths and general disintegration. The main four-legged animal I encountered was the cow.-

- Ian Frasier, from the first part of his travels in Siberia. Audio slideshow here. 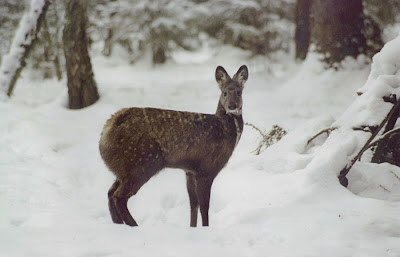