The first published extract from The Book of Barely Imagined Beings appears today in Aeon Magazine today under 'An enigmatic spider and the fragile threads of human memory.'  Here is the illustration by Golbanou Moghaddas that appears in the book: 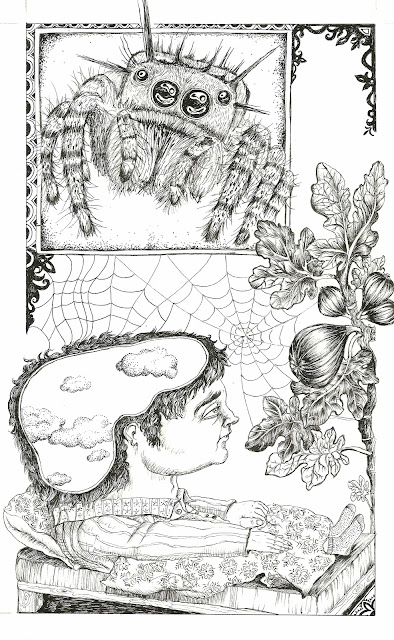 The text as it appears on Aeon is slightly cut from the version in the book, which has this epigraph from A Little Fable by Franz Kafka:


You need only change your direction.

And the Aeon version cut this:


The male Audax...has palps (frontal appendages) as splendidly hued as the feathers of a bird of paradise -- for what girl can resist a boy who has technicolor genitals in the middle of his face? [1]

Also missing from the Aeon version are five marginal notes that appear in the print and eBook versions. So for example the word highlighted in red here:


...as the young Ludwig Wittgenstein put it, ‘only a man who lives not in time but in the present is happy’...

is linked to this marginal note:


Marcus Chown (2007) suggests that at the Omega Point (a condition hypothesized by the cosmologist Frank Tipler as the time when technology makes possible a state of being indistinguishable from eternal life), the greatest imaginable joy any human could experience would be to return to the ‘eternal’ summer days of childhood, when your favourite dog was alive and your parents were young and full of life. Something like this, perhaps, is evoked in the final scenes of Terrence Malick’s 2011 film The Tree of Life.

[1] Turns out I have failed on a technicality here. It seems the technicoloured ‘genitals’ are in fact chelicerae, designed for transporting venom and used for courtship/wrestling in courtship but not technically sex organs. (h/t BH)
Posted by Caspar Henderson at 08:01

Email ThisBlogThis!Share to TwitterShare to FacebookShare to Pinterest
Labels: spider