In the cellar, the machine was cranking towards full power. Its gases and fluids agitated intensely, with a muffled cacophony of swishing and crashing sounds like ocean turbulence in a subterranean cavern. The smell was foul beyond belief, noxious gases and corrosive acids ripped apart and recombined in the magnetic flux. 'Factitious airs' -- gases that had never existed in nature -- hissed ominously into being, jets of pressure forcing them through tubes and valves, sending them out like sightless eels into their new world.

-- from The Influencing Machine by Mike Jay.

With the Air Loom, "Man had made a machine that could turn themselves into machines." 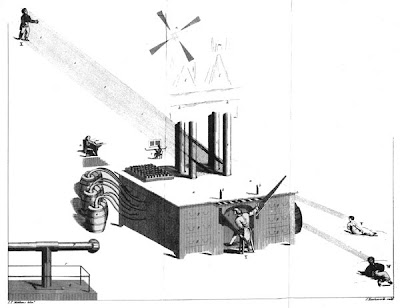 Posted by Caspar Henderson at 06:19