'The power of plankton' 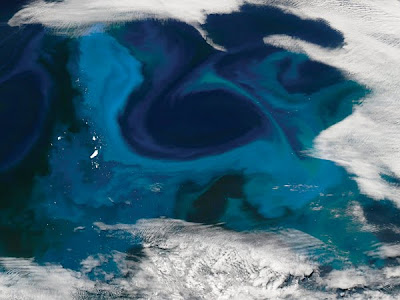 The more we learn, the more questions we have. Some of the questions are in the realm of basic biology. What evolutionary processes maintained such an extraordinary diversity of microbial species? Have microorganisms that play key biogeochemical roles gone undiscovered?...

...Then there are the practical questions. As humanity pumps nitrogen into the oceans and carbon into the atmosphere, causing dead zones and disrupting the climate, how long can phytoplankton keep cleaning up our mess? Can we enlist phytoplankton genes to make hydrocarbons so we no longer have to drill for oil?...

...Ultimately, the microorganisms in the ocean will survive, as they have for billions of years, and they will help restore Earth to a biogeochemical steady state. If we can understand them better, perhaps we can help them help humanity survive as well.

--  from an overview by Paul Falkowski of discoveries as to the nature and role of phytoplankton in Earth system.

Falkowski thinks that event in the best case it will take a long time — probably about 1,000 years — for the current damage being caused by humans to be reversed:


The phytoplankton will survive, but humans are going to pay the price. I find it very discouraging that a large segment of US society is not accepting conclusions that are based on objective science. It's distressing because everybody seems to be their own climate expert. I don't think humans realize that we're a vulnerable species.

Posted by Caspar Henderson at 12:32