All about them stretched the strange sea landscape, which had been covered by millions of tons of water since the beginning of the world.

'You know it's rather solemn to be down here,' said the Snork. 'We must be pretty near the deepest part of the ocean by now.'

But when they reached the biggest chasm of all they didn't dare go down. The sides sloped steeply and the bottom was obscured in green gloom. Perhaps there was no bottom!  Perhaps the biggest octopuses in the world lived down there, brooding in the slime; creatures that nobody had ever seen, far less imagined...

...They decided to pitch camp on a high pointed rock, which they could just reach by their stilts...and while the others curled up tightly together and slept, [Moomintroll] sat staring out over the desolate sea bottom. It was lit by the red glow of the comet, and shadows like black velvet lay across the sand.

Moomintroll thought how frightened the earth must be feeling with that great ball of fire coming nearer and nearer to her. Then he thought about how much he loved everything; the forest and the sea, the rain and the wind, the sunshine, the grass and the moss, and how impossible it would be to live without them all, and this made him feel very, very sad. 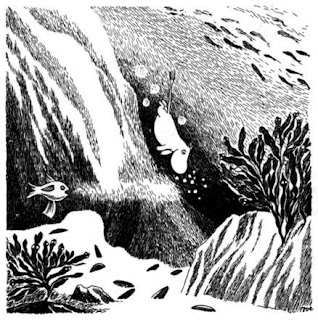 The Geological Record on Ocean Acidification -- human impacts greater than anything in 300 million years.
Posted by Caspar Henderson at 06:21

About time someone recognised the importance of Moomintroll in science writing! Excellent.