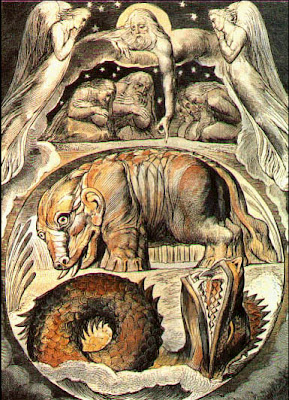 In an interview the theologian Richard Kearney makes these points, among others:


Even in the most humanistic anthropological affirmation of creative power...we mustn’t forget that our creation is the repetition, reactivation, or refiguration of some creative power that both precedes and exceeds us.

He says this in reference to Coleridge's claim vis-à-vis the primary imagination of the romantic poet (the 'repetition in the finite mind of the eternal act of creation in the infinite I Am') but it could as well apply to manipulation of life within the context of our growing but in some respects still rudimentary understanding of how living systems organize.


The imagination that thinks it is sufficient unto itself and has no other beyond, no vis-à-vis outside of itself, is on an unethical path.

'Deep ecologists' and other environmentalists would stress that on an ethical path our imaginations must be open towards the non-human living world as well as the human.


Evil is rooted in the human, even radical evil, but it’s rooted in the inscrutable depth of the soul such as we have not yet and maybe never will be able to completely comprehend.

He stresses that he is not talking about some cosmological or metaphysical force of evil but something that is specific to human behaviour.
Posted by Caspar Henderson at 05:56