'The only exuberant thing in this part of the cosmos' 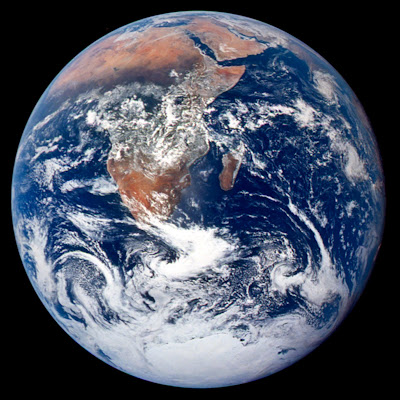 Earth has not always looked like this. Suppose you can rewind time, slowly at first—you see the field of lights on the night side of Earth extinguished, these having been lit by industrially inclined humans only in the last few decades. Rewind at a million years a minute, and you can watch ice sheets regularly advancing and retreating across the Northern Hemisphere, every six seconds or so, roughly at the rate that you breathe. Accelerate the rewind to a hundred million years a minute, and you can review the whole history of the planet in three quarters of an hour.

The first thing you’ll notice at this speed is the continents skating over the surface. South America and Australia are moving south and join with Antarctica after twenty seconds, and suddenly Antarctica loses its ice sheet and turns green. North America sails back towards Europe, South America towards Africa, and the Atlantic closes up in less than a minute. The continents assemble into the supercontinent Pangaea after two minutes. As you continue into the past, you’d see the white flash of an occasional ice cap, but it’s the exception. Usually there is no ice on the planet at all. That is, until something strange happens about six minutes into the rewind. In the blink of an eye, the entire sphere is suddenly encased in white ice, and stays that way for a full ten seconds. It clears to blue again, then another ten seconds or so later repeats the cycle. You’ve just witnessed two episodes of ‘Snowball Earth’ and fast rewound through one of the revolutions on which we want to focus...

-- from the introduction to Revolutions that Made the Earth by Tim Lenton and Andrew Watson.

(The title of this post is a quote from Lewis Thomas)
Posted by Caspar Henderson at 07:02