What the whales become

Richard Black reports a peaceful outcome to the meeting of the International Whaling Commission in Santiago de Chile, at least compared to earlier acrimony over moves to expand quotas.

Elsewhere (The 'value' of protecting whales), he looks at what some see as paradoxes or inconsistencies in the positions taken by countries such as the U.S. and Australia towards different whale species [1], and articulates a widely shared question about the wisdom of relying solely on economic valuation to protect whales and other life forms.

Regarding value, a version of the question goes back in industrialised countries at least as far as Henry David Thoreau, who wrote "can he who has discovered only some of the values of whalebone and whale oil be said to have discovered the true use of the whale?"[2]

Thoreau's question is highlighted up by Susan Tomes in her mixed review of David Rothenberg's Thousand Mile Song [3]. Tomes is surely right to say that contemporary western attitudes towards whales were heavily influenced by the discovery in the 1970s that the world's largest creatures were singing complex songs deep in the ocean; it had "great emotional power" at a time when the whole planet had become a theatre for MAD [4]. There was more to this than whales being'cute'.

That sensibility informs work such as that of Gregory Colbert, whose Ashes and Snow project has included images of the artist swimming with sperm whales [5]. 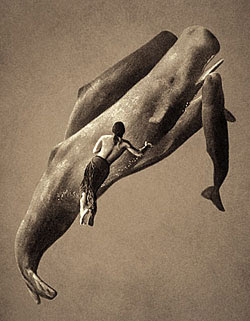 Is more sympathy for whales likely in the 21st century? Is it inevitable?
How will emotion, calculation, exploitation and triage interact? What if the times get darker and more destructive -- in which case, are there things still to learn from Thoreau's contemporary Herman Melville? [6] 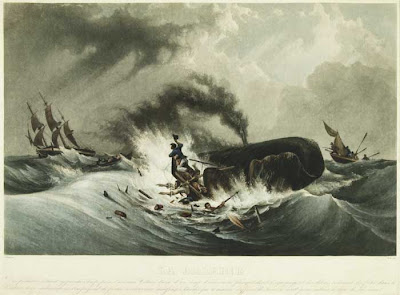 1. A key example is the North Atlantic Right Whale and shipping. According to yet another piece by Black (Leading Edge, 26 June), six deaths a year is enough to extirpate the remaining population of around 300, so slow is their rate of reproduction; and six were killed last year. In July 2007 NOAA and the USCG implemented a scheme which they say will result in a substantial reduction in ship strikes. [The world's most endangered cetacean, the vaquita, lives in waters for which the U.S. and Mexico are jointly responsible. It's estimated that between about 40 to 80 of the remaining population of about 300 (sic) are killed every year in gillnets intended for the (also critically endangered) Totoaba.]

2. If Thoreau were writing today he might add or substitute tourism revenues and, er, 'willingness-to-pay-as-a-practical-metric-of-existence-value' to/for the exchange value of bone and oil.

[In History of the Order Cetacea, published in 1834, the whaling master Capt. William Scoresby describes a fight between whalers and a whale over her calf. The mother whale comes to the surface, Scoresby writes, darting back and forth, stopping short or suddenly changing directions. She tosses up water, churning up the seas, refusing to leave her child even though three ships and harpoons approach. "She loses all regard for her own personal safety, in the anxiety for the preservation of her young; dashing through the midst of her enemies. There is something extremely painful in the destruction of a whale, when thus evincing a degree of affectionate regard for its young, that would do honour to the superior intelligence of human beings. Yet the objects of the adventure, the value of the prize, and the joy of the seamen with the capture, cannot be sacrificed in reflecting to the refined feelings of compassion."]

4. Like many people of my generation and background, I grew up with admiration of whales as a given. But I only really started to try to pay attention after actually seeing some whales, and doing a report for BBC radio in the mid 90s on the possible impact of something called ATOC on whale communication (see Noises off - The cacophony of human noise in the ocean grows louder by the year). The investigation had some unexpected turns. At one point I visited a researcher into animal hearing whose studies included desert tortoises being exposed to sonic booms. She would put them on a running machine geared down ten times and send them chasing after lettuce while playing loud noises to them. This was funny to see but actually a lot more sensible than some sunbeam-from-cucumber satire might have it. Since then, the oceans have got even noiser. See, for example, a lot has happened since then.

5. Of course, sperm whales don't sing in the way humpbacks and some other species do, but they have acquired charisma since the 70s too. By chance I was in Fayal in the Azores years ago when Colbert and his team were photographing this section of the project, and shared a meal with them. They were thoughtful and hospitable. Ashes and Snow is striking but it doesn't quite 'do it' for me; there is too much New Age/Fashionista/Leni Riefenstahl-Last of the Nuba body beautiful about it.

6. Consider, for example, the famous chapter The Whiteness of The Whale which shows some of what is so great about this extraordinary book, and also some of what is bad and dated about it ('bad' and 'dated' are not the same thing). By the way, Thoreau was about 34 when Moby Dick was published in 1851. Did he read it, and if so what did he think?
Posted by Caspar Henderson at 08:00

Email ThisBlogThis!Share to TwitterShare to FacebookShare to Pinterest
Labels: whale