In First Impressions [1], an article about the paintings in the caves at Chauvet, Judith Thurman asks what the world's oldest rock art says about 'us'. 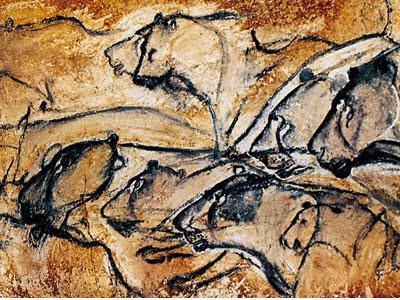 Part of the answer, of course, is that it can be hard to get beyond our own preconceptions. But some facts seem reasonably sure, including that over a period of about 25,000 years the same animals - primarily bison, stages, aurochs, ibex, horses and mammoths - recur in similar poses [2]. We know, says Thurman, from ubiquitous hand prints that were stamped or airbrushed on the walls that people of both sexes and all ages, even babies, participated in [at least part of] whatever activities took place. And we know that nothing of landscape -- clouds, earth, sun, moon, rivers, or plant life, and only rarely, a horizon -- figures in cave art.

Thurman does a good job of exploring the state of archaeological knowledge as well a range of views and feelings. And there are more insights in comments from 'witnesses' on the official Chauvet site.

I have little to add except:


a) to note the long term physical context: these caves were carved by water through uplifted reefs, laid down over 100 million years before. (Compare some speculation with regard to caves in the GBR here);

b) to express of my unceasing awe and wonder at a culture that could have delighted in so many animals for so many thousands of years...before, presumably, driving them extinct [3]. (Compare Barry Lopez's observation in Arctic Dreams of indigenous people's delight in an abundance of animals [4]); and

c) to wonder how these people did imagine the non-human/non-animal world(s) [5]. 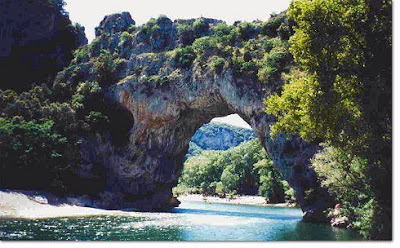 2. The official Chauvet site notes "dangerous animals, who did not figure on Paleolithic menus, are largely dominant (more than 60% of identified species if we count mammoth)".

3. They also delighted in, or at least paid the very closest attention to, the details. According to Ian Tattersall (Becoming Human: Evolution and Human Uniqueness), "We know for certain that the Cro-Magnons carefully monitored their prey over the seasons of the year: animal depictions sometimes show bison in summer molting pelage, stags baying in the autumn rut, woolly rhinoceroses displaying the skin fold that was visible only in summer, or salmon with the curious spur on the lower jaw that males develop in the spawning season. Indeed, we know things about the anatomy of now-extinct animals that we could only know through the Cro-Magnons' art".


What will we do as the wisdom of the past bears down on our future? It is a story of ageless conversation, not only conversation among ourselves about what we mean and wish to do, but a conversation held with the land -- our contemplation and wonder at a prairie thunderstorm, or before the jagged line of a young mountain, or at the sudden rise of ducks from an isolated lake. We have been telling ourselves the story of what we represent in the land for 40,000 years. At the heart of this story, I think, is a simple, abiding belief: it is possible to live wisely on the land, and to live well.

5. What, if anything, was their version of Blake's

Posted by Caspar Henderson at 09:06